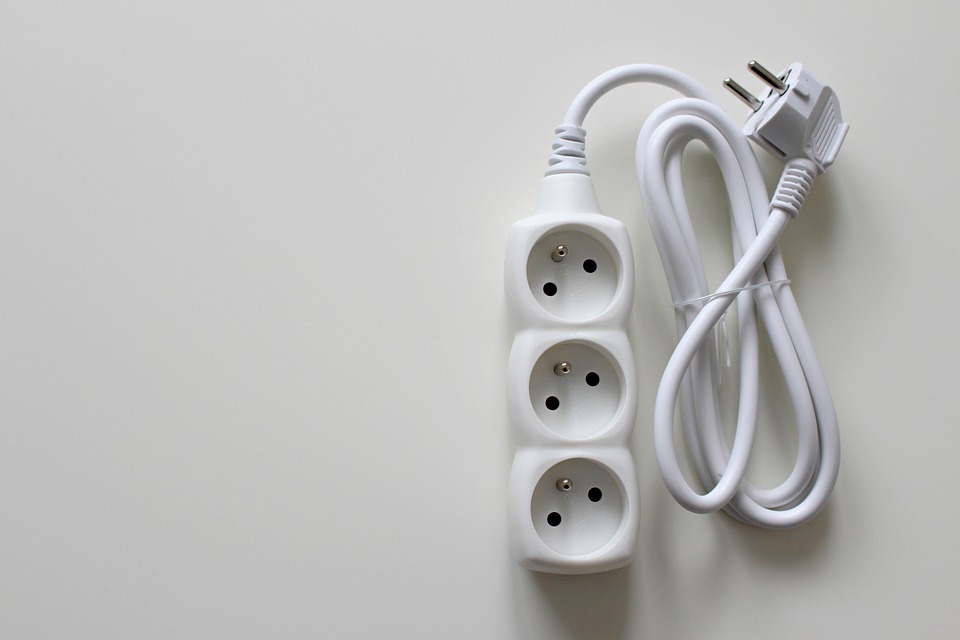 How Do Extension Cords Work?

Before looking at safety tips, let’s look at how extension cords work. You might’ve wondered how multiplug electrical extension cords work. They’re the epitome of convenience, allowing you to extend the areas in and around your house where you can use electrical equipment. What’s even better is that you can even have more than one piece of equipment plugged into the same multiplug extension at a single time.

A lot of people wonder how this works. How is it possible to use a multiplug extension on a single 120V outlet when the multiplug can accommodate two 120V appliances. The answer is simple. Do the multiplugs split the current, allotting less current to each appliance connected?

Watts, which we haven’t mentioned yet, is the amount of electrical energy that can be derived from an electrical source and is calculated by multiplying the amps and volts together. In the example of water flowing, more watts would mean the flowing water has more power to move objects such as a watermill.

When considering how volts, amperes and watts work, you can understand how two 120V appliances can draw power through an extension cord from a 120V wall outlet. The devices will each draw the amount of current (or water, in the example above) they need, even if the force of the power (or water) flowing into the each device isn’t as much.

Here’s what can happen if you use an extension cord incorrectly:

A lot of homes, especially old homes, aren’t fitted with circuit breakers. While most people realize the importance of using circuit breakers for safety, It’s still wise to avoid electrical overloading, as circuit breakers occasionally don’t kick in when a hazard is present.

So, if you were wondering if extension cords are safe, the answer is mostly, but only if you know how to use them. When used incorrectly, extension cords are a hazard in your home that can lead to loss of property, injury and even death. To keep your family safe, a proper knowledge of safe extension cord usage is a must. Teach everyone in your home and at your workplace how to use electrical extensions safety and you’ll actively help to ensure that less accidents occur each year.

In theory, avoiding electrical overload is quite simple – avoid connecting too many appliances to an extension if they all demand high levels of current to operate. Most people aren’t electricians though, and knowing what appliances are safe to connect together isn’t always easy.

Appliances that typically demand a lot of electricity to work include:

When looking at what appliances are most dangerous to use together, consider their amp usage rather than watts usage. If you avoid plugging two of the above appliances into the same extension cord simultaneously, you’ll already reduce your risk of an accident.

When possible, check the manufacturer’s guides of each appliance in your home to establish its amp usage. An amp usage under 0.5 is minimal, and you’ll safely be able to connect at least two of these appliances to the same extension most of the time.

Appliances that use upwards of 8 amps are definitely high usage devices and shouldn’t be running from the same multiplug extension in most instances.

Again, referring back to the example of water flowing through a pipe, thicker pipes can easily carry more water. Similarly, thicker wires have a higher load capacity than thin ones. It goes to reason that the water will also lose some pressure if the pipe it’s flowing through is longer (let’s not factor the effects of gravity into this example, assume the pipe is 100% parallel with a flat surface).

So, two major risks for electrical overload are wires that are too thin or too long for the job. However, this isn’t a very useful measure to go by. How long is too long for use with your power drill outside the house? How thin is too thin for your hairdryer? This is where extension cord ratings come in.

The American Wire Gauge number, is a number to rate the thickness of electrical extensions. The lower the AWG number, the thicker the wire and the more load it can handle. That said, length also has an influence on the load an extension wire will be able to take.

Electrical cord wires come in three main sizes. Light duty cords look like lamp wire cords – they’re very thin and only suitable to power very light duty devices. These cords are often rated for devices up to 7 amps (although it’s best to always check the manufacturer’s guidelines), which means they can easily power lamps, clocks or even a cellphone charger.

Medium-duty cords are best for powering devices that require 10 amps or less. Appliances that are suitable for connection with a medium-duty cord include laptops, radios, TVs or even most microwaves.

Heavy-duty cords are suitable for appliances requiring up to 15 amps of power. They’re suitable for use with power tools, heating devices (these include not only heaters, but ovens and toasters too) and large appliances like refrigerators and dishwashers.

It’s important to note, however, that you won’t typically be able to simultaneously run two heavy duty appliances off the same heavy-duty extension cord. While it’s okay to have both your toaster and kettle plugged into the same extension simultaneously, you can’t turn both on at the same time as this will most likely cause the power to trip.

When using extension cords to reach areas away from wall outlets, the best thing you can do is use your better judgement. Familiarize yourself with what devices use most power and avoid ever connecting two devices with a high amp usage in the same extension together.

Also consider your extension cord load capacity. A medium-duty extension cord shouldn’t typically have to supply too many appliances all at once – even if they aren’t on the high end of the intermediate amp usage spectrum.

Try to use the shortest extension cord for each job. It’s tempting to go out and buy the longest extension cords hoping they’ll reach everywhere you need them to, but doing this can be dangerous. As mentioned, the length of a cord will cause a drop in voltage, which then leads to electrical overload on the wiring. When you must use a long cord, be sure to get one with the optimum AWG rating for its purpose.