LED lights are incredibly useful. Unsurprisingly, they’re fast becoming the top pick for property developers, facility operators, and lighting experts. More people are opting to use LEDs in their homes and businesses every day. But you might be wondering – what’s all the rave about? Is it worth the fuss to switch to LEDs? Are LED lights better than their traditional counterparts? To help you get closer to deciding, here’s a list of some of the advantages and disadvantages of LED lights.

LED stands for Light Emitting Diode. These globes work through special materials that emit photons (light particles) whenever current flows through them.
LED bulbs can be big or small, so they can be used just about anywhere. The quality of LED lighting has greatly improved since earlier years. Nowadays, LEDs offer some of the most versatile lighting solutions available.

Durability is probably the most notable advantage of LED lights in comparison to other kinds of lighting. Most LED bulbs will outlast alternatives by far, meaning you won’t constantly need to replace burnt out light bulbs.

The average lifespan of an LED light is around 50,000 operating hours or more. To put this into perspective, the average lifespan of an incandescent light bulb is 1,500 hours and fluorescents last for 8,000 to 10,000 hours. One LED light can last for several years in constant use before a replacement is needed (just make sure that you’re buying quality LEDs to enjoy this benefit).

An overlooked advantage of LED lights is how affordable they are. Because they last longer, they don’t require frequent replacements, saving you money in maintenance and operating costs in the long run.

Some people look at the initial cost of an LED light bulb and are put off by it. But what you should be looking at is that the initial cost will save you time and money on replacing cheaper light bulbs. Because of this, LEDs are more financially feasible than traditional lighting.

Another standout advantage of LEDs is their efficiency in consuming low amounts of power. Their energy consumption is so low that, in comparison to incandescent light bulbs, they consume as much as 90% less electricity.

This lower power consumption doesn’t just look good on paper. If you switch to using online LEDs you’re sure to see a drop in your monthly electricity bill. Businesses are especially prone to overspending on lighting and using LEDs can combat inflated energy bills.

Unlike other lighting such as fluorescent and mercury vapor lights, LEDs are environmentally safe.

Fluorescent lights and mercury vapor lights contain mercury, which is dangerous for the environment. The mercury contents of these bulbs also means that they have to be handled with special care once they have reached the end of their lifespans.

Increased Productivity in the Workplace

LED lights can mimic natural light, which is highly advantageous in the workplace because as studies show, environments that are well lit without being too harsh help employees maintain a more positive mood, perception, and overall performance.

Another benefit of LEDs in the workplace is that LEDs regulate circadian rhythm, which is your internal clock that regulates feelings of sleepiness and alertness throughout the day. This is why it’s also referred to as your sleep/wake cycle. Lighting plays a role in your circadian rhythm, which in turn affects your productivity. When light is low, your body releases melatonin, which is what makes you feel tired. Since LEDs produce excellent lighting, they can suppress melatonin, which means your employees should feel less tired and maintain high levels of productivity.

They Don’t Heat Up

When it comes to lighting, one hazard you have to look out for is heat. The good news about LED lights is that even after hours of use, they remain considerably cooler than other alternatives.

This is thanks to the fact that they generate close to no heat, making them safe for touching. And because they don’t consume as much power, they can operate efficiently on low-voltage electrical systems.

LEDs easily comply with commercial safety standards. They reduce electrical safety hazards like burns or fires, making them a much safer option overall. When it comes to safety, LEDs are simply superior.

LEDs are adaptable because many are quite small in size. This makes them ideal for an infinite number of different lighting applications. They can be used in circuit board lighting, mood lighting, outdoor lighting, as well as stadium lighting. Because they are focused lights, they are excellent at performing specific lighting tasks like, for example, spotlights, torches, night lights, reading lights, desk lamps, security signals and accent lamps.

LED lights instantly turn on and off, which means they don’t have a warm-up period as is the case for metal halide lamps. Additionally, you don’t have to worry about possible degradation caused to the device due to frequent switching. LEDs don’t burn out easily.

LEDs come in a variety of different colors, allowing you different options and choices to find one that matches the theme you want. You can choose anything from ‘warm’ to ‘cold’ lighting, depending on your preference.

The buzzing sound that many incandescent lights make isn’t something you have to deal with when it comes to LEDs. Even after years of being used, your lights won’t start buzzing. In the office, this is very beneficial because any noise can disrupt concentration, disturbing workflow and productivity. 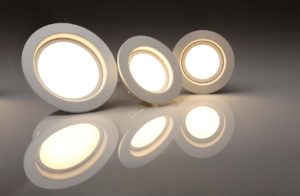 Unfortunately, LEDs do initially come with a bigger price tag compared to other light bulbs, which is why some people don’t install them. Having to spend more is unappealing to if you don’t know about the benefits of LED lighting. Even though the price has decreased over the years, it’s still too much for a lot of people.

LEDs require specific power supply specifications to work optimally. The quality of your lighting can drop if there’s an increase in the electrical current.

LEDs can overheat in environments that have high temperature levels. If you want to place an LED in an area where there’s often high temperatures, like in a kitchen, you’ll need to plan properly. A heat sink can ensure your bulbs continue working efficiently without failing.

LEDs distribute light which is not spherical, making them an unsuitable lighting option for use in large, open fields.

In order to light up, LEDs require the right electric polarity. Without this, they simply won’t light up. Electric polarity refers to the direction in which the electric current runs. So if you’ve connected the direction of the current incorrectly, there’ll be no electricity to flow through and the light simply won’t go on. Other lights like incandescent lights don’t have this sensitivity, but you can easily fix the problem by swapping the connection around.

Due to the blue light they produce, continued exposure to very powerful and intense LEDs can cause irreparable damage to the retina, causing vision to become less sharp. But you don’t have to worry about your cellphone, tablet and computer screens, as their luminosity is too low to cause eye damage.

However, exposure to LED lights can cause a disruption in sleep patterns when used during the night – especially in young children. If you want LEDs in your home, there are some things you can do to prevent exposure to lights interfering with your sleep:

As long as you follow the above guidelines, using LED is still safe and healthy.

At the end of the day, looking at the pros and cons of LED lights, it’s hard to argue against their value and overall usefulness. If you were wondering whether to convert all the lights in your home or property to LED, there’s nothing that should hold you back. Hopefully you now understand the many benefits of LED lights.